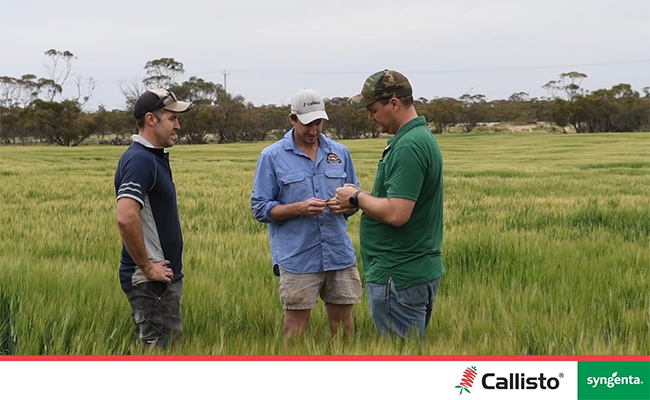 Why we tried CALLISTO and liked it

Mixed farmers Corey and Adam O’Callaghan have shifted the way they control broadleaf weeds in their cereal rotation with significant logistical benefits.

The brothers crop 7300 hectares in the Victorian Mallee as well as being prime lamb producers. Cereals are a mainstay of their rotation as well as vetch, while also cutting oaten hay for feed.

Adam said they first used the pre-emergent herbicide CALLISTO to establish some barley in 2020.

“We first saw CALLISTO in a 2019 trial run by Nutrien Manangatang,” he said.

“We tried CALLISTO on some suitable paddocks including areas that had previously been in a pea rotation, particularly on those areas that can give us trouble later in the season when [survivors] are harder to kill.”

Corey said using CALLISTO made a lot of sense to them.

“The idea with using CALLISTO is to get it on early before the crop goes in because you can’t get [back] around the whole farm that quick,” he said.

“We had seen Group Hs used in-crop so we wanted to see what CALLISTO could do.”

Adam said not having to make an early post-emergent application was a big win where possible.

“We’re very big on limiting your passes where you can. You don’t want to be running over a paddock early with herbicide, then coming back with nutrition and following up with a fungicide,” he said.

“If we can use CALLISTO early and it can hold the broadleaves, we’re happy to wait and come in at a better timing.”

Adam said the logistical benefits were enhanced by being able to tank mix CALLISTO with the grass-weed pre-emergent BOXER GOLD.

For more information on CALLISTO speak to your local Nutrien advisor or visit https://www.syngenta.com.au/callisto to see the full list of weeds it controls.