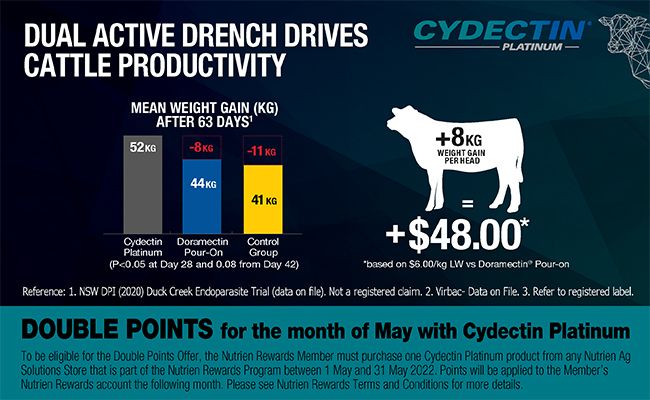 Weaner Cattle - Is Your Drench Doing Its Job?

A recent scientific article in the Australian Cattle Veterinarians (ACV) journal highlights the need to check that your weaner drench is effective.  Drench resistance is widespread in Australia. 6-13,16  It is recommended that combination drenches (more than one active against the same parasite) be the standard treatment of cattle.

The ACV journal article outlines valuable data from 2018-2021 on:

Effective drench programs are essential to drive good productivity in young Australian cattle.1,2,3,4  The important worms in Australian cattle are Barber’s Pole Worm, Cooperia and Ostertagia.5  Drench resistance in these worms can lead to a decrease in productivity.1,2,3,14,16   The ACV article collates 25 trial results to show that overall mean efficacy of single active drenches in Australian cattle can be estimated at only 72%.  Drenches need to be working at 95% or better. A summary of the mean results for pour-on drenches and worm type is found in Table One. Other key findings include:

The impact of drench resistance in cattle is often not severe illness or death, like in sheep; but instead, significant loss of productivity. Over a period of eight weeks, the failure to effectively remove worm burdens in growing cattle can mean a potential loss of 8-12 kg.1,2 While many cattle producers can visually identify a difference of 30-50 kg, it is difficult to identify a productivity loss of 8-12 kg. This is one reason that drench resistance may remain unidentified on some cattle properties.  This is a problem, because investment in genetics and feed may be undermined by failings in the animal health program.

Cydectin Platinum is the next generation dual-active pour-on drench for cattle containing moxidectin and levamisole.

It also is the first veterinary use of DMI-SorbTM technology to keep the product concentrated to the areas where it was applied and reduce absorption variability. All in the convenience of an easy-to-use low volume pour-on.

Cattle producers are encouraged to work with advisors to seek improvements in their parasite management programs.  The use of combination drenches should be the default position when chemicals are needed to protect the health and productivity of cattle.

Table One: Summary by pour on drench formulation for Faecal Egg Count Reduction Tests (FECRTs)  and Total Worm Counts (TWC) completed between 2018 and 2021 in multiple locations in Australia. All data uses arithmetic mean.

No one should rely upon the information contained in this article without appropriate professional advice regarding relevant factors specific to your situation such as environmental conditions. Always read and follow label directions before using any product in this article.